10 Spring Beers for the End of a Long Winter

If baseball considers February “spring,” there’s no reason the beer industry shouldn’t release its spring seasonal offerings around this time too.

It’s weird timing, sure, but this is a weird time of year for beer in general. Drinkers are transitioning away from darker, maltier, boozier brews and into hoppier, more refreshing beers. This creates organized chaos in the beer coolers as space once taken up by winter warmers, strong stouts and caramel, coffee or even chocolate-flavored treats and bold barleywine becomes an awkward mix of winter leftovers and warm-weather arrivals.

It’s kind of like that first day of warm weather in a cold corner of the country that tends to hit sometime in February. The sun comes out, the temperature flirts with 60 degrees or more and folks start wondering where their favorite restaurant is hiding its outdoor tables and whether it’s too early to start puttering around in the garden. Then five days of temperatures in the 30s and 40s give way to late-season snowfall and any doubt about whether it’s still winter has been erased.

The addition of craft beer to Cambria Suites new food-and-beverage program didn’t come from an idea born at Choice Hotels’ corporate headquarters. It came from the beer cooler behind the bar at the Cambria Suites in Columbus, Ohio. Michael Murphy, Choice’s senior VP of upscale brands, was on a tour of meetings with chefs, executives and owners to discuss ways to improve the brand’s F&B offerings.

“I looked over the bar and down into the beer case and saw a strange bottle,” Murphy said of his stop there. “They had kind of hid it from me because it was off standard, but the bartender said it was a local craft beer that everyone was asking for.”

When Cambria Suites rolled out its new program last May, it included a new standard: All locations must have two local craft beers available in bottles.

Hotels are taking advantage of the rapid growth of the craft beer industry in the U.S., which has more than doubled from $5.7 billion in sales in 2007 to $12 billion last year, according to Mintel, a global supplier of consumer, product and media intelligence.

The Americanization of Beer Styles

In the USA there have been several unique and distinctive beer styles that have emerged over the past 70 years. American-style light lager with their low calorie and colored derivations has been the most copied and popularized throughout the world. These beers are defined by their high corn, rice, sugar adjunct content, and low malt and hop taste profiles along with “refreshing” higher carbonation. Their presence has been both dominating and ubiquitous. But times are changing.

Over the past 30 years innovative craft brewers in the United States have created many beer types that at the time defied categorization as European styles. The popularity of these “America-style” beers has grown both in the USA and internationally. What has defined these styles and why did they emerge? Here are a few select examples of how both culture and access to ingredients helped to define new directions in beer character.

Let’s first take a look at some of the earliest manifestations of contemporary American styles of beer. It all began with the emergence of American-style Pale Ale. In the 1970s American homebrewers were just beginning to discover beer characters that were different than American light lager. Homebrewers were using hops with a heavy hand and finding the flavors, aroma and bitterness to their enjoyment. Cascade hops were the only American hop available to homebrewers in the early days. While English-style Pale Ales were the inspiration, the ingredient of Cascade hops was the only fresh hop ingredient available. The unique quality of American-style Pale Ale was born.

Trying to decide what to get your sweetheart for Valentine’s Day? Try something chocolatey, sparkling or sexy.

For a story running in Wednesday’s Flavor section, I asked a group of local beer experts for their recommendations for Valentine’s Day beers. Here’s what they recommended:

Cheers to spreading (and sipping) the LOVE!

It’s been noted that South Louisiana’s locals suffer through Thanksgiving, Christmas and New Year’s just to get to Mardi Gras season. Mardi Gras, or Carnival, is a month-long preparation for the fasts of Lent in heavily-Catholic South Louisiana. On the Monday before and on Fat Tuesday itself, all state offices, local businesses and parade route roads are closed. Even kids and students get a few days out of school to participate in the festivities! 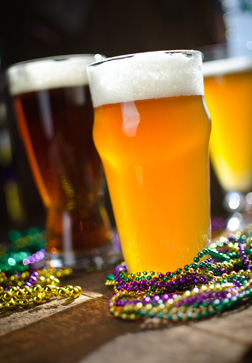 Mardi Gras is taken very seriously—the celebrations are more important to the culturally proud Creole and Cajun population than any of our nation’s holidays.

The Mardi Gras celebration commences on Epiphany (twelfth day after Christmas) and ends on the day before Ash Wednesday. Mardi Gras is French for Fat Tuesday, referring to the practice of celebrants’ last night of eating and imbibing way too much rich food, king cake and strong drink before the ritual fast of the Lenten season, which begins the next day.

Mardi Gras arrived in North America as a French Catholic tradition in 1699. The Le Moyne brothers, sent by King Louis XIV to preserve France’s claim on the territory of Louisiane, entered the mouth of the Mississippi River on the evening of March 2, 1699, or Lundi Gras.

The next day, the party proceeded upstream, where they slaughtered a native buffalo and celebrated Mardi Gras. In honor of the holiday, the brothers named the spot Point du Mardi Gras and called the nearby tributary Bayou Mardi Gras.

At Glacier Design Systems, Inc. we are always asked what the difference is between certain types of beers – Ale vs. Lager, Malt vs. Stout. Fortunately, we found this handy Beer Guide from NBWA, which lists terms often used within the beer industry.

Ale – A malt beverage brewed with (usually) barley malt and fermented at relatively high temperatures (60-75 Fº) with top fermenting yeast, which usually creates a fruity taste. Ales are produced with a wide variety of colors, palates and alcoholic strengths.

Barley Wine – An English term for an extra-strong ale (implied to be as potent as wine).

Bitter – A well-hopped beer similar to pale ale.  The difference is essentially that pale ales are bottled whereas bitters are usually only draught beers.

Bock – German word for strong beer. It is a lager, usually dark, made from barley malt that usually displays a malty sweetness and relatively high alcohol content while limiting the presence of hop bitterness. Bock beers are traditionally served in autumn, late winter or spring.

Inside The World’s First “Brewery Incubator”

Microbreweries and brewpubs may have exploded in popularity over the past decade or so, yet that’s in spite of the challenges brewers face when getting started, including heavy regulation, hefty overhead, and substantial risk. But in downtown Houston, the world’s first “brewery incubator” aims to grease the wheels for aspiring brewers, by offering community, a shared workspace with professional brewing equipment, and a tap room with a built-in customer base, so brewers can focus on what matters when they’re just starting off: making the best beer possible.

“We cultivate these nano-breweries through business workshops, networking events, co-marketing, investor pitches, and co-working until they are fully ready to launch their own brewery,” reads the Brewery Incubator’s Kickstarter. The project is actually an incubator within a more established incubator, Kitchen Inc., which provides food entrepreneurs with affordable commercial kitchen space and a café to sell their wares.

Founder and president Lucrece Borrego said she saw the need for a dedicated brewing incubator space after opening Kitchen Inc. three years ago. “As I met these people that were starting breweries, I realized the startup requirements – both the capital requirements and licensing–were very big,” even bigger than in the food world. According to Borrego, regulations in Texas can make it particularly difficult for small breweries to get their start: On the one hand, Brewpubs are forbidden from showing their beers in festivals and are required to sell food. On the other, breweries can’t sell their beer on the premises. Rules like this mean that “[Texas] hasn’t been on the forefront of the craft brew scene the way that it could,” according to Borrego.

Sorry, no Tweets were found.